Forecast for the Wrecker but Flying on Mickey's

For a long time I have been meaning to have a look at EM style for F3F. A number of conversations with Simon, Martin and Mark have revealed that I would have to change my current setups before I could start to even have a look at this style.


So after a evening of playing around with my Ascot settings with some sound advice form Martin I was ready to go. Why the Ascot? Because she has a ballast tube in the fuselage it gives an easy option quickly to move the C of G to see what effect it will have on the technique. 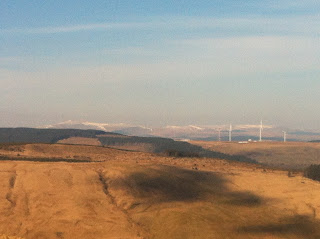 The forecast was for a nice 10 mph on the Wrecker which would have been ideal. However when I got there John the Taxi was flying his electric model at the Wrecker car park. Why the electric well slope lift was coming and going all the time as there only a slight breeze.


A wonder up the highest point didn't help either. The windmills over Treorchy were still indicating north easterly direction and the new windmills at the far end of Mickey's were suggesting the Crest, but what wind there was at the top was now feeling more like the back of the Wrecker!


John had now landed so I headed over for a chat hoping the conditions would build a bit more as flying of the Back of the Wrecker in very light conditions were just not holding any attraction what so ever!


After half and hour I wondered back up the top the Treorchy windmills were still indicating north easterly but the new ones at the far end of Mickey's were showing southerly and standing on the edge of the Back of the Wrecker the breeze had picked up a bit more but there was quite a bit of west in it by now.  No forecast I had looked at suggested any hint of south westerly with nearly all of them shown the wind moving from north easterly though east south east over the next twenty four hours.


With what wind there was still quite light, I much rather be on Mickey's than the back of the Wrecker even though it would mean a long walk, so over I went. By the time I got to Mickey's the wind had picked up a bit more and was smack on Mickey's proper. Wind speed was now hovering around 6 or 7 mph and occasionally picking up to around 10 mph, although I suspect this was more to do with thermal activity. 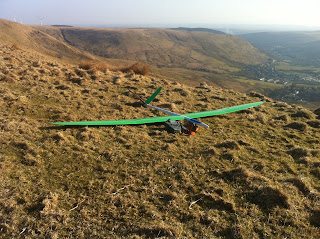 A quick fly with the Ascot dry proved that the air was quite buoyant so I landed and put about a third ballast in. Even though the condition were light I spent a very enjoyable hour and half  playing around with my settings and trying to get the EM style to work.


Like everyone I have played with EM with my standard F3F setups but have found it very easy to kill the speed. Ever though the conditions were light the new settings seemed to be working and look like a good base to start from.


So what has changed? Well basically everything is a bit softer and I find running with a little more differential helps kick the plane back into the slope, although this might get wound off a little as in big air this might kick the model in to much. 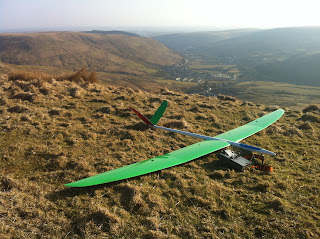 The next step will be to have a look at the effects of rudder inputs on the turn, but that is for another day and by now the wind had dropped right down again so it was time to go home.
Posted by Andrzej Tabero at 16:58 1 comment: