The forecast suggested that we would be welcomed by 25 mph wind on Mickey’s, someone didn’t tell the wind! By half past the there was a little air starting to move but it was way off to the south, which it wasn’t forecast to move to until the afternoon.


Joel has developed quite a liking for the Back of the Wrecker after Slope Glide this year and the first round saw his good from continue by taking it with a 45:99. Mike Evens was second with a 48:22. Gary Harrison made a long journey to maiden his new Rotmilan and took third in the round with a 51:83. 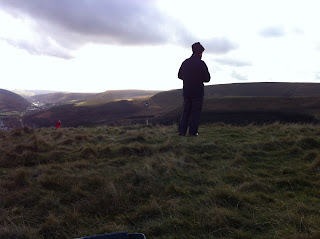 
Round three was taken by Martin on his first visit to Wales following representing Great Britain at Rugen at the World Championships with a 44:79. This time moved into the second spot with 45:61 and Joel was third with a 47:00.


Martin followed up by taken the next round with the F.T.D with a 44:37. Mike was second with a 47:79 and another newcomer to the Welsh Winter league Stuart Wallace was third 47:92. 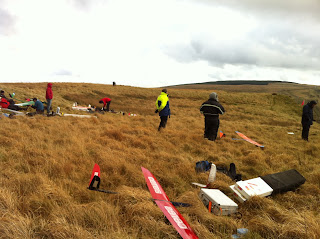 Mike Evans took round five with a 46:64 quickly followed by another of the Mynd marauders Andy Burgoyne 48:26 fly his Radical. I was lucky enough to catch a bit of good air and took third spot with a 48:59. 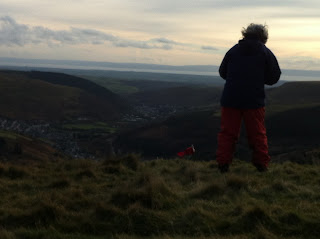 So for the first Winter League on the Back of the Wrecker it was very enjoyable. This slope is usually susceptible to a lot of thermal activity which can make it very erratic. However, this proved to be the contrary and a pleasant surprise in that we enjoyed very stable conditions throughout the day.


So before the final results a big thanks to Martin, Joel and Andy West. They worked tireless all day to keep the competition running smoothly. 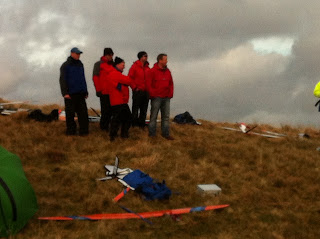 With the conditions so stable it was to close to call who had won the day, and once all the scores have been loaded into the spreadsheet it proved that there was hand full points between the top three.


Joel won the day with Martin just behind him and Mike in third.


I was great to see so many new faces at the Winter League and thank you for all supporting the event.


Posted by Andrzej Tabero at 21:51 No comments: