Just an update on my MPX Profi 4000 tx Problem

My Profi 4000 was sent off the Mike Ridley Monday lunchtime via Parcel Force on 48 hour delivery.

Mike emailed Tuesday lunchtime to say it had arrived and again at 4:00pm to say it was all repaired.

What an excellent service and thank you Mike.

Most of us that use Mulitplex gear know about Mike excellent services, but if you don't and you need to contact him the details are below.

Posted by Andrzej Tabero at 17:20 No comments:

Well as you can see from my previous post things were conspiring against me for this weekend. With only my spare transmitter left which had only had one F3F model, my trusty old Elita in the memory I thought I should have a test fly which resulted in me popping a servo on landing, silly me..!

That was the final straw and as a result I decide to sit it out in the centre for the day.

The forecast had suggested that the westerly would quickly swing to south-westerly and finally move around to south southwest so Martin and Simon had quickly got the course up on Mickey's. 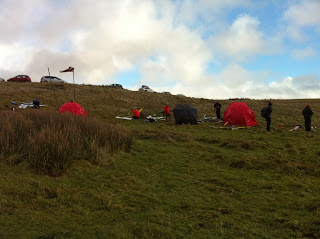 It was left to Simon to get the Woollybacks which would probably be the last F3F of 2013 in the UK underway.

Mike Evans came out with all guns blazing and took the first round with the only sub 40 for the round with a 39:90. Grag Dakin has been conspicuously missing  from the slopes this year due to the sad loss of his Dad. Greg took second spot with a 43:09. Tony Livingstone took third spot with a 44:88. 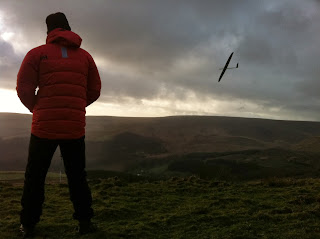 Round two saw Mike stamp his authority on the competition by taking the second round with a 41:36.  Martin Newnham was second with 41:95 and Greg was in the frame again with a 43:28.

Round three would see journey man Pete Gunning who had made the long trip from Scotland take the round with a 42.01 with his Stinger.  Mike and Martin were just behind him again with a 43:20 and 42:84 respectively. 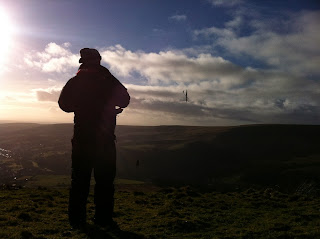 Round four saw Mike taking the honours again with 45:15. Martin Drewett took second spot with a 47:31 with Martin Newnham in third with a 48:37

I don't know if it was the excesses of the festive period and everyone struggling under pressure of Turkey and Christmas pudding or just how the slope was working. The wind speed had been generally pretty good  but we hadn't seen the plethora of sub 40's I had been expecting with these conditions  but all of a sudden thing got a lot quicker!

Greg suddenly found a 34:74 to stake a claim on the competition. Pete was finding the conditions to his liking clocked a 36:13, just beating Martin Newnham 36:29.

This had clearly fired Martin up and he grabbed his next opportunity to fly the fast time of the day a 34:44. Mike sensing the threat pulled out a 36:44 to take second spot and Simon  was just behind him with a 37:10. 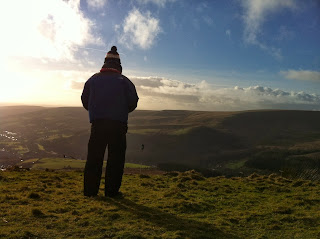 Everyone was sensing that it was starting to get very close at the top and with Martin flying a 36:23 to take the penultimate round follow by Greg with a 37:01 and Simon 38:22.

Going into the final round there was hand full of people who could finish on top, especially if anyone made a mistake of got bad air.

So before the final results, a big thanks to Martin, Simon and Peter who organised the course and collected the money. Thanks to everyone for supporting our events this year and helping out. 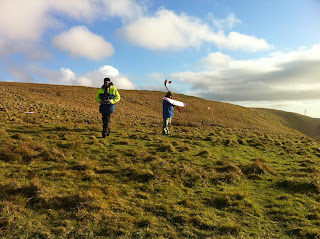 So who would be the 2013 SWSA Woollyback Champion. Even though the conditions weren't blistering it turned out to be a very enthralling contest.

Maybe quite fittingly after loosing so much of the year due to personal problems it was Greg Dakin who came out as a worthy and deserved  winner, I am sure your Dad will be looking down from on high somewhere enjoying this victory . 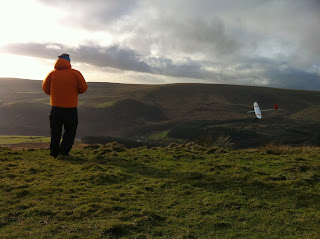 Mike Evens who made so much of the early running finished second with Martin Newnham finishing third.
Thanks again and my I wish you all a happy New Year

Getting my gear ready for the "Woollyback" Christmas Bash I was greeted with "Data Loss Immanent - Contact MPX Service" is not want you want to see.

If anyone out there has had this and found an quick fix please let me know! 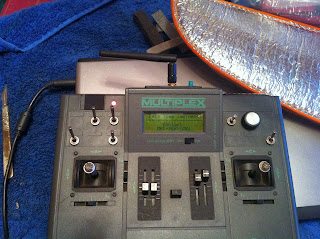 Talking of the Woollybacks, the Farmer will be opening the gate for us at 08:30 am if you want to have a quick fly before the comeptition

I hope we have all had a good Christmas.

The weather forecasts are mixed for Sunday, but most will put us on the Mickey's and give us a good opportunity of flying with only a minimum chance of rain with some heavier stuff not arriving until mid/ late afternoon.

For those of you who are interested we will meet at the 'T' junction at 9:00 am on Sunday morning. Obviously, if you let know beforehand I can start cobbling together a flying order, but don't worry if your want to turn up on the morning we will still let your fly.

See you Sunday and all the best

Andrzej
Posted by Andrzej Tabero at 19:22 No comments:

SWSA F3F Winter League is off

I am sorry to say that although one or two forecasts are suggesting the rain might not arrive until mid afternoon quite a few others are suggesting that it will arrive around or before midday. Added to this we have a mild and moist south to south-westerly air flow this time of year which could well mean clag prior to the rain. This in all reality means we won't have enough time to get a competition in.

So I am sad to say I will have to call tomorrows competition off!

On a more brighter note may I take this opportunity to  wish you all a happy Christmas. If it's  Christmas, it means  it's Woollyback time! Looking at the calendar Sunday the 29 falls nicely between Christmas and New Year. So if I get enough interest I will propose to  run it on this date.

Andrzej
Posted by Andrzej Tabero at 12:16 No comments:

Hum, I have to say that pissing people off on a Friday night is one of the worst jobs of being a CD!  Looking at the a couple of forecasts  they really don't give us a lot of hope of getting a competition on Sunday with clag in the morning giving way to rain in the afternoon.

However, there are one or two forecasts starting to show signs of improvement. So seeing as we haven't managed to get a round in yet for the winter league I will give it every opportunity to improve and make a call by midday tomorrow .

Posted by Andrzej Tabero at 00:16 No comments:

We will try again! Sunday is the first round of the SWSA F3F winter league. I will make a call Friday if the competition is on and if so mare details of meeting times.

If I can have entries by Saturday I would be grateful as it helps with organising the flying order and get things running on the day. However, if you wake up Sunday morning and decide at the last minute you want to fly you will more than welcome, but you might find yourself early in the flying order!

If you are thinking about having a go in F3F the winter league is a great place to start, it's all pretty informal and don't worry if you haven't got the latest state of the art carbon fibre dream machine to have a go.  Sure it nice to have but it is more important that you have a go at standing in the center of a course and trying to fly a kilometer as fast as you can with what ever plane you have got.  Better to find out flying a foamie that F3F is for you than spending thousands only to find out you have made an expensive mistake!

Looking forward to seeing you all Sunday

Andrzej
Posted by Andrzej Tabero at 22:02 No comments: