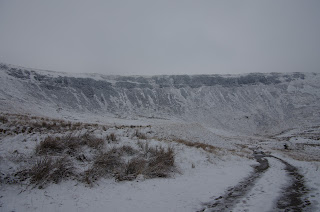 Well with all the fast times this year there was another first and this was cancelling an event because of the cold.

With Snow thick on the ground and 10 to 15 m/s blowing up the Wrecker it was so tempting to try to run the event. But with Simon measuring -160C wind chill there was a very big concern for peoples welfare with dangers of hypothermia or even possible frost bite in these conditions.
Added to this we would now be moving towards the sort of temperatures that NiMh start to play up. The thought of a fully ballasted model heading back towards the slope at over a 100 miles per hour and then loosing control was all to worrying to contemplate!

Not to mention the joys of landing a fully ballasted model  in these temperature. Freezing cold temperatures, glass and carbon fibre and lots of energy to dissipate which all add to a good recipe for disaster.
There was a notable sigh of relief from everyone when it was called off!

Thanks to Ian for organising the event.  Also thanks also to Traplet  Publications who provided a goody bag for all the competitors.  There was some discussion on departure about a possible rescheduling of the event. This will clearly be up to Ian and how we fit it in to what looks like a busy year this year, but it would be a shame to let this annual event slip.
See you all soon
Andrzej
Posted by Andrzej Tabero at 17:39 No comments:

Waiting for the Wind 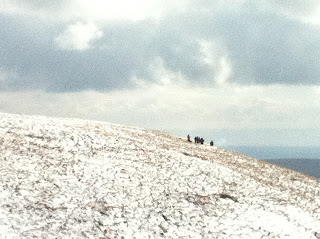 Well after the excitement of the last few weeks the wind decided not to play ball.

I got there a tad late after a bit of a over indulgences due to the results of the pervious days Rugby match, to find all the competitors on the westerly of Mickey’s as this was the most likely direction from. However they had been there for a couple of hours with little or wind to even guess which direction it was going to settle, so it was called a day.

Thanks to everyone who have supported the events and especially Martin and Simon who both helped out so much.

So the Champion for the 2012-13 SWSA F3F Winter League is Joel West with Martin Newnham as runner up and Mike Evans in third spot.

The Fastest Time for the League was Mark Abbotts with his stunning 28:75 on the Crest.

Posted by Andrzej Tabero at 22:20 No comments:

What an incredible day and I wasn’t there due to family commitments. When I handed the timing gear over to Martin and Simon Sunday morning we all thought it could be something special if the clag and rain stayed away.

From Martin write up I counted 16 sub 30 second flights that is just incredible. Congratulations to Mark for winning, to keep his nerve and focus in those conditions must have made this victory very special.

Congratulation to Martin on the 26:84. I know how fustigated he was at the last winter league when the Sun caught him out and almost certainly cost him a sub 30 second run.

The times that Kev and I have been on the Wrecker sports flying and it has been absolutely ballistic it doesn’t surprise me of the sub 30 times and we always knew that one day those conditions and a competition would coincide and something very special would happen and Sunday looks like it was that day!

For those who haven’t see I have pasted Martin’s write up below.

Whitesheet BMFA F3F League 1 ()
The start of the new season got off to a bang and what a BANG, I don’t think there has ever been anything quite like it in the before. Earlier in the week it looked like it would have to be cancelled due to issues at the scheduled location.  Unfortunately Whitesheet is unable to provide all wind directions, therefore a decision was made to relocate to after consulting with all the registered pilots and reopening registration should anyone else wish to participate.  Andrzej Tabero kindly confirmed we were able take advantage of the slopes in as they provide all directions. The direction we needed was ENE and this put us on what is regarded as ’s best slope, the Wrecker, coupled with a 20 – 23 m\s wind speed and you have the right ingredients for a great competition.  It was overshadowed by the potential of hill fog, but thankfully the weather gods were on our side and we didn’t have one stoppage due to weather all day.

Round 1 got on the way and after a few weeks before when Mark Abotts went sub thirty with his Caldera flying a 28.75 it wasn’t expected that we would see a time like this again anytime soon.  How wrong we were, Joel West stepped up round one and posted a 29.46 a few pilots later and Martin Newnham went sub 30 with a 29.61.  This wasn’t the finish of the round and Mark Redsell keen to get going, not only went sub 30 but broke the British record again flying a 28.73. The round contained many low to medium 30 + times.

Round 2 the same 3 pilots went sub 30 again Mark getting close to his new British record. Joining Mark, Martin and Joel was Paul Garnett with his first sub 30 and new PB flying a 29.24. Tony Livingstone having only attended a few winter league events made yet another improvement on his PB going from a 37.37 down to a 34.94.  Ian Falconer only started flying last year and has also only attended a couple of competitions to find out what it’s all about, was getting times in the mid forties, which may not seem fast to some but it you know the Wrecker it’s not for the faint hearted especially in 20 – 23m\s wind.

Round 3 see Joel West just slip into the low 30’s but Martin Newnham and Mark Redsell still were trading blows.  Martin Newnham broke the record with a 26.84, but Mark wasn’t going to give anything away with a 29.97. Richard Bago was also getting closer to going sub 30 but not yet.

Round 4 Joel West was back with a sub 30 time, but not quite fast enough and Martin Newnham just took the round with 29.11.  Mark Redsell again was not too far behind and still less than 30 seconds with a 29.71.

Round 5 and Richard Bago finally got what he was looking for, posting a new PB 29.44 and his first sub30, again Mark Redsell was still there taking the round with 28.79.  Martin Drewett got a new PB and first sub 40 time with a 37.98 and improved on this again in the next round, posting a 34.20.

Round 6 and Stuart Wallace who is relatively new to F3F competitions was already having a good day and up to this point his slowest time had been 40 seconds posted a 35.80 and I think a PB, his remaining round was over 40 seconds but 5 sub forties from 7 rounds is great flying by any standards.  Joel West got his final sub 30 of the day to take round 6, with Richard Bago in second and Mark Abotts in third.

The 7th and final round and Mark Redsell posted his 6 sub 30 of the day to take the last round, followed by Joel in second and Mark Abotts in third.

To summarise, all of the above equalled an epic day in for everyone, regardless of whether you went sub 30, sub 40 or improved slightly on previous times.  The conditions provided some of the best conditions I have personally ever flown in and I am sure others would echo this view.

I would like to thank everyone who helped out on the day but special mention must go to Simon Thornton getting the course up and CDing with me.  Richard Bago, our buzzer supreme and everyone that spent time out on the buzzers.  Stuart Wallace for taking on the task of debt collecting (entry fees). Finally Joel West, Mark Abotts, Paul Garnett who must have a right arm like popeye’s as they did most of the launches for everyone all day.

Posted by Andrzej Tabero at 17:48 No comments: